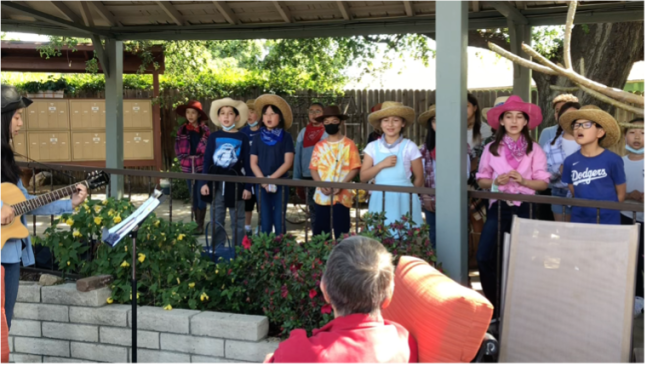 “I think it was a fun and joyful experience to help make the elderly happy.”—LJ T., age 10

Dressed in red bandanas and straw hats, our fourth-grade 49ers belted out verses from songs associated with California’s Gold Rush Era. The words of “Shenandoah”, most notably, echoed through the grounds of the British Home in Sierra Madre on the beautiful spring day. That iconic folk song has become a post-Civil War American classic and a favorite of the fourth grade.

The classes began practicing all the numbers long before their visit, as part of their California history studies. Then they took the show on the road straight to The British Home, with teachers Karla Yulo and Becky Lievense at the helm. Music teacher Doris Wang accompanied the chorus with her guitar, and it was obvious that she has imbued the group with a sense of lyricism: their performance was polished, charming, and in tune. Residents, who were treated to a hamburger and hot dog barbeque on the patio, could be seen tapping their feet or clapping their hands to the melodies.

The importance of the experience was not lost on Madelyn W., age 10, who noted: “Well, I felt that it really made everyone happy. They were smiling. During my performance I tried to enunciate clearly for the people who couldn’t hear. I met a man—I think his name was Bob—who was deaf but could read lips.  I think it’s important to help them and show them that people in the community care.”

As delightful as the performance was, mixing and mingling turned out to be the highlight of the day. Old and young made connections, and the children were not shy about introducing themselves and asking questions of the residents, some of whom were well into their 80s and 90s.

“I felt happy to be there to make older people’s days better. I was thinking how nice they were. They gave us great snacks. I think it’s important to do things that help people out and not every school does that,” said Russell M., 10.

Lauren B., also 10, summed up the day this way: “It made me happy to see a lot of people who are a different age but who liked the same songs as me. Because so many of us have a lot of things, it’s important to learn to share stuff with other people because you feel good and they feel good.”

The British Home in Sierra Madre is an American-owned retirement community. It offers “a unique and elegant, yet homey, lifestyle for those who would love to be part of a caring community . . . where residents are ‘at home’ wherever they come from.”  The Home opened its doors in 1931, and over the years has hosted royal visits from both Princess Margaret and Princess Alexandra. The highlight of all visits occurred in 1983 when The British Home was graced by the presence of Her Majesty, Queen Elizabeth II herself!

What makes High Point unique? Our mission is dedicated to awakening the joy of learning and inspiring every student to reach his/her fullest potential in a collaborative and stimulating community of caring and academic excellence. Our devoted and talented faculty provides a strong, challenging, and enriched K-8 curriculum that, in addition to the core academics, includes Spanish or French, vocal and instrumental music, art, library, the latest in technology and innovation, and daily physical education.

This grounding of critical thinking and social and emotional skills paves the way for our students entering high school with the best possible foundation.  Last year, our graduates gained entrance into local independent high schools and earned over $700,000 in merit scholarships.

Please come and visit during our Open House or tours this fall to see our diverse and close-knit community and be sure to visit our website to learn more about our academic programs.