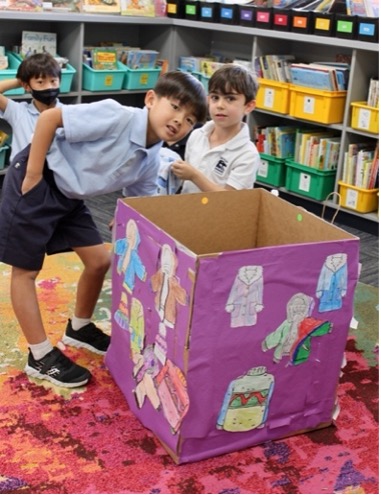 “It made me feel good because when you help someone else, it makes you feel good too.”—Connor R., age 5

Continuing our tradition of Community Engagement, the youngest students at High Point Academy collected new and gently-used jackets and coats for Families in Transition—Pasadena. Their service learning project began with discussions based on a reading of Last Stop on Market Street by Matt de la Peña so these kinders could learn about and begin to engender empathy—the first step in meaningful giving. Mrs. Wiebe and Mrs. Talavera put out a call for cold-weather clothing, and the kindergarten families did not disappoint. Bags and bags of jackets and coats poured in. There were so many items that the children struggled to fit them into the large hand-decorated boxes readied for delivery to the Families in Transition office.

Families in Transition (FIT)—Pasadena is the homeless education program of the Pasadena Unified School District. In accordance with the federal mandates of the McKinney-Vento Homeless Assistance Act, the organization promotes school stability and academic success for local students and families experiencing homelessness.

The first step at school was creating decorative boxes for each classroom. The children all pitched in. Owen C., age 5, described his role: “I added some green paper to the boxes. I felt excited because I wanted to decorate the boxes to be kind.” He had a clear picture of the need for warm weather clothing as well.  “We collected clothes so they could have jackets and they won’t have to worry about the coldness.”

Jacqueline B., age 6, seconded the motion. She noted, “I felt happy because people could have the jackets, and I felt sad because they were my old ones. But they couldn’t really fit me anymore, so I wanted to be kind and give them away to be helpful.”

“The jackets were for people who don’t have coats or jackets because they don’t have money. We all shared to help other people,” added Connor R.

Six-year-old Kara W. summed up the entire experience with a worldly observation: “It made me feel good because I was helping other kids. And then they can help others. Some of them could get cold and they don’t have any money and it’s good to help them. And it’s good to help the earth so jackets and sweaters get used again instead of going into the trash. I would like to say that helping the earth is helping the solar system.” Well-said, Kara!

Mrs. Wiebe had an important observation of her own: “I was delighted by the students’ response to this project. In kindergarten it’s our goal to simply broaden a child’s understanding of who is in their community and what others’ needs might be. It’s about growing students’ empathy. As the weather cools off and we get rain, five and six-year-olds understand the feeling of being cold. Collecting warm clothing is a concrete way for them to show caring to people in our city.”

What makes High Point unique? Our mission is dedicated to awakening the joy of learning and inspiring every student to reach his/her fullest potential in a collaborative and stimulating community of caring and academic excellence. Our devoted and talented faculty provides a strong, challenging, and enriched K-8 curriculum that, in addition to the core academics, includes Spanish or French, vocal and instrumental music, art, library, the latest in technology and innovation, and daily physical education.

This grounding of critical thinking and social and emotional skills paves the way for our students entering high school with the best possible foundation.  Last year, our graduates gained entrance into local independent high schools and earned over $700,000 in merit scholarships.

Please come and visit during our Open House or tours this fall to see our diverse and close-knit community and be sure to visit our website to learn more about our academic programs.